PERRIER-JOUËT BRINGS THE WONDER OF NATURE TO DESIGNMIAMI/ 2016

Art Director Simon Hammerstein invited visitors to explore a whimsical blend of scenography, staged performances and sensory experiences. A cast of characters that includes Adèle Jouët, Pierre Perrier and Art Nouveau pioneer Emile Gallé immerse guests in a seductive world of love and art, suffused by the beauty of nature. A 19th century library beared a scent of pears and citrus fruit, a delicately feminine dressing room was transformed by orchids and magnolia, while a spectacular dinner table melted into a surrounding decor of vines and honeysuckle.

L'Eden by Perrier-Jouët is more than just an evening venue. It welcomed guests day and night as a lively forum for conversation and shared experiences. Alongside memorable parties, it hosted a full program of conferences, tastings, talks and dinners that complement the stylish effervescence of DesignMiami/. It was also showcasing Perrier-Jouët's new artistic partnership with the San Francisco-based designer Andrew Kudless, who is presenting new works inspired by nature, Art Nouveau and the champagne process. 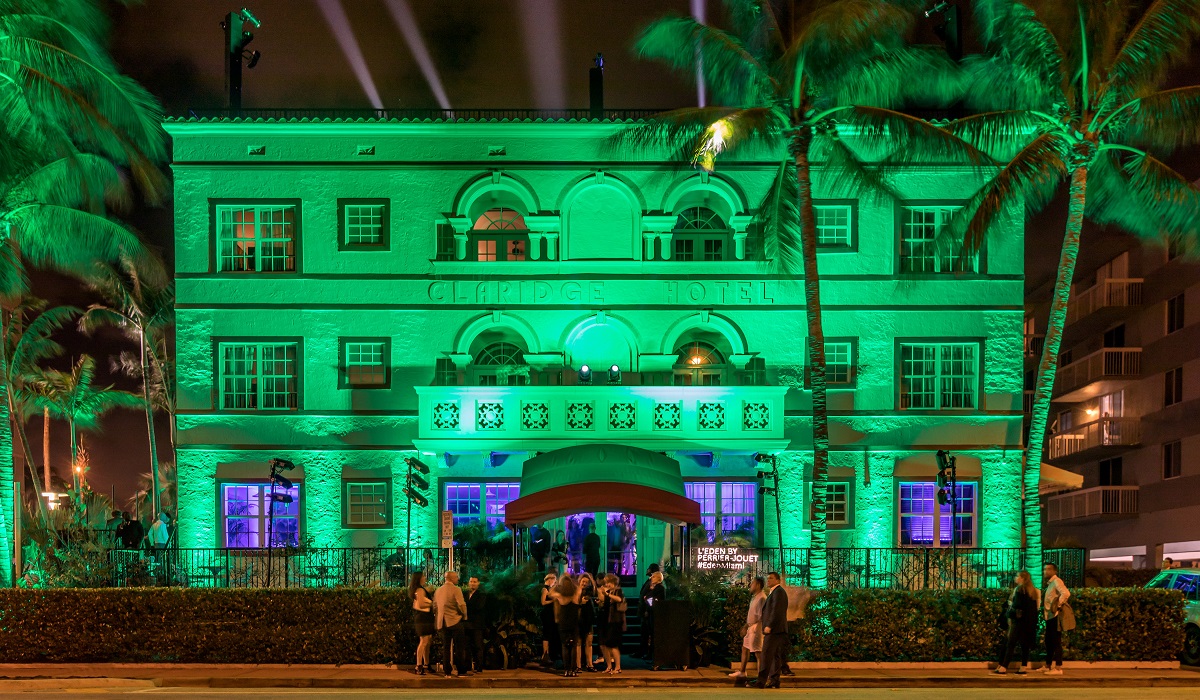 WELCOME TO THE WILD #EDENMIAMI

Brings the wonder of nature to DesignMiami/ 2016

LET YOUR SENSE OF WONDER LOOSE

L’Eden by Perrier-Jouët is the latest and boldest manifestation of the House’s historic mission to bring beauty to utility and poetry to everyday life.

Perrier-Jouët believes the role of nature very important with its almost mystical power to conjure a sense of beauty and wonderment – an enchantment experienced by all who stepped inside L’Eden by Perrier-Jouët.

Inspired by the power of nature to transform the urban landscape into a unique and enchanting world apart, L’Eden by Perrier-Jouët is a preview of an original concept destined for cities around the globe. It is named after Perrier-Jouët’s mysterious Eden cellar in Epernay, where the House’s rarest and most prestigious champagnes are kept, and to which the Cellar Master possesses the only set of keys.

Guests arriving at L’Eden by Perrier-Jouët were welcomed into the exclusive penthouse suite, transformed for the occasion by luxuriant vegetation, which combined with avant-garde lighting and design to create a captivating immersive experience. Among the space’s spectacular installations were a living green photo booth, an organic bar with indigenous Miami florals, and an enchanted tree, the brainchild of London-based designer Tord Boontje.

The Enchanting Tree by Tord Boontje

Miami florals in the Eden suite

The Enchanting Tree by Tord Boontje

TO VISIT THIS SITE,
YOU MUST BE OF LEGAL DRINKING AGE
IN YOUR OWN COUNTRY OR REGION

Perrier-Jouët is a subsidiary of Pernod Ricard, itself a member of several
organisations promoting responsible attitudes to drinking and against
the misuse of alcohol.

Perrier-Jouët uses cookies to enhance your user experience. By continuing to browse the Perrier-Jouët site, you are agreeing to accept our use of cookies.

You do not have the required age

We are sorry but local legislation forbids the promotion of alcoholic drinks via the internet from your current location, and access to this site is thus not possible.

The birthday date field(s) must be filled out.